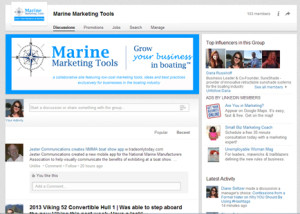 If you visited any groups after August 21, 2013 on Linked, you may notice that things look a bit different. Most notably the main image at the top of LinkedIn group pages.

LinkedIn recently made some nice design updates to their groups with the overall look and feel (nice improvements I think). In addition to a new look, there is a new feature image spot called a “Hero Image” (similar to the feature images found on company pages) that allows you to showcase what your group is about at the top of the group page. 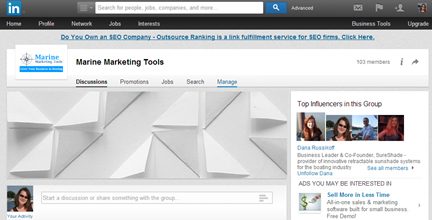 There is a default Hero Image when you first go to your newly updated group page (gray with overlapping triangle folds)… and its not initially clear how you can change that image. You can’t just click on it to change it or anything simple like that.

After a bit of poking around (group admins are used to that a bit on LinkedIn) I discovered that it is a fairly straightforward process to update that image. 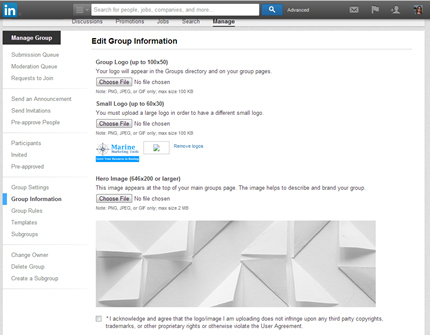 To change the default image you need to go to: Manage, Group Information. Then half-way down the page you’ll see the new Hero Image section to edit.

LinkedIn specifies the Hero Image size as 646×200 with a maximum file size of 2MG. Browse for your image, check the box that the image is OK to use and then upload. If your image is not sized you’ll get an option to crop a larger image. DONE.

BUT WAIT… what do you put in this Hero Image? I suggest that you think about it a bit before simply uploading a larger version of your group logo. Use it as promotional space that supports the main goal(s) of your group.

Since my Marine Marketing Tools LinkedIn Group is a companion group to my website, I decided to use the header from my website with a brief description of what its all about under the header. I created the image in PhotoShop and saved it as a JPEG as the correct size. 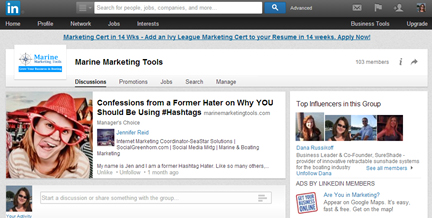 Another change that came with this new Hero Image feature is the placement of discussions marked as “Manager’s Choice”.

All of the posts you have designated as Manager’s Choice will appear after your Hero Image in rotation. There is an auto rotation (a bit slow I think) and there are arrows that allows users to manually move through the rotations. 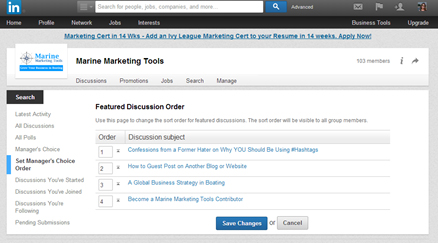 If you have a lot of posts designated as Manager’s Choice you may want to reorder them. This is another edit that is not easy for LinkedIn Group Admins to find.

Overall, the design changes to the LinkedIn Groups is a nice change. Posts or “discussions” are easier to read – you see both the title and detail before any link info.

Founder & Editor at Small Business Marketing Tools
With nearly 30 years of integrated marketing experience, Diane is the founder of SBMarketingTools.com and author of the award-winning book PR Tools to Toot Your Own Horn. Diane also runs Marine Marketing Tools, a site that bridges her passion for boating and small business marketing, and two boating lifestyle sites: MyBoatLife.com and BoaterKids.com.